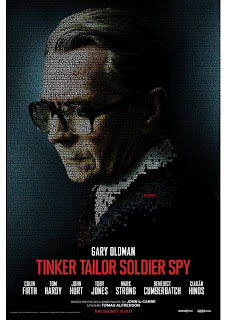 So you want a film that grabs your attention and holds it? Look no further, Tinker, Taylor, Soldier, Spy has it all. Filmed on location in London, Hungary and Turkey this is surely set to become a classic. A great cast come together and create a masterpiece of modern cinema. The Guardian and The Telegraph award it 5 stars, with the independent being a bit stingy with only 4. Some people have called it indulgent, but I just appreciate quality entertainment and as indulgent as it is, the verdict is pretty unanimous – this is movie gold.


Don't confuse it with Bond, this is in a different league, realistic, darker and edgier. There is little glamour to be had and there are no gadget overloaded, Aston Martin stunts to be seen.

If you miss it, you will regret it. The experience on the big screen with a large portion of popcorn to stop you from biting your fingernails, is the way to do it (unless of course you are one of the lucky ones with a home cinema? In which case where do you live – I'll bring my own popcorn?).

For those of you who haven't read the book or seen the trailer, here is a brief synopsis without giving too much away:

A John le Carré's cold war classic. Set in the fairly bleak brown and beige coloured 1970's when a retired MI6 agent finds himself sucked back into the world of lies and deceit with the discovery of a mole. A roller coaster ride of past histories, and rivalries ensues... as the search for the betrayer is undertaken.