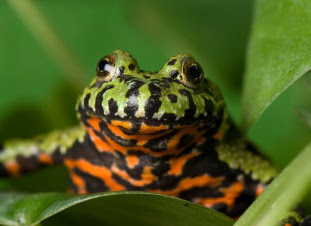 A sad start to the week as we say goodbye to the pinkfrog unofficial mascot 'Harry the fire bellied toad' (technically a frog, but due to their bumpy skin – known as toads) and his tank chum 'Lucky, the fire bellied newt, who both died this weekend, aged 7 and 9 years respectively.
Great little characters, Harry and Lucky will be sorely missed. Harry's achievements include, never failing to headbutt the rock when feeding (he was a very special frog...) spectacular belly flops from the highest rock (always a show off) and of course his unwavering romantic pursuit of Hermione, which was always unsuccessful. Lucky, who broke the mould when it came to the established naming conventions, will also be much missed and he leaves behind his best buddy Draco, who at least will not have to suffer the indignity of having his feet mistaken for dinner again, the grandfather of the tank at 10 years old. We hope that froggy/newty heaven holds an unending supply of freshly malted white mealworms and friendly females who will not reject their attentions. Rest in peace old pals, Hermione, supported by Draco, now has some big shoes to fill.
Posted by Angie at 03:15