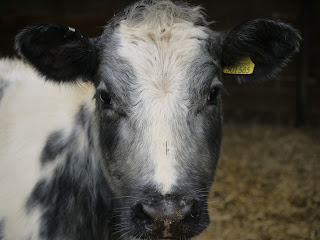 I just had to bring this to your attention after watching a report on Countryfile. I, like many others, have not eaten veal due to my perception of it being a cruel and unethical form of meat production and whilst I have never condemmed others for doing so, I have never ordered it in a restaurant or purchased any to cook at home. So you can imagine my surprise when I saw a report, by John Craven (who once had one of my cigarettes at the ICBP - my best claim to fame...) urging the public to take a fresh look at British Rose veal and the way it is produced.
It would appear that the once frowned upon techniques used to rear veal calves has long since been abandoned and in fact is illegal in this country (I genuinely didn't know that!) and I believe most EU countries. Which means that new methods of production are not only ethical, but are approved by animal welfare organisations such as the RSPCA, which sounds like a pretty good endorsement right?


On top of that, it would seem that if we, as members of the public increase our demand for this product we can help prevent the majority of male dairy calves being destroyed at birth. When male calves are born of a dairy herd, they are often just destroyed as they prove too expensive to rear and have no financial value to the farmer. Now I think it's safe to say we all know that the Dairy farming business is not what it once was and that British farmers are finding it tough to say the least, so another reason to help support the UK veal trade is to help support them and help to grow a new revenue stream fueled by a more up to date awareness of the UK veal trade.

If the demand grows, then farmers will be more inclined to sell on male calves or even rear them themselves, specifically for the veal trade – something that I can only see as a good thing.

And if all that wasn't enough to make you re-think UK veal as an option, apparently it tastes fabulous! Typically, it has a delicate flavour (so I am told), is naturally low in fat and contains high levels of Omega 3.

As always, if you buy Bristish (most packaging are now clear about where meat is sourced) you can be sure that the standards and methods used are approved and adhered to, whereas some other EU countries are still a little lax in their approach to the legislation – so remember, look for the flag or ask your butcher and make sure you know you are buying British meat, support our farmers and have a clear conscience in doing so.

I have done a little searching and there are plenty of places you can find Rose Veal online, if you can't find it in your local supermarket or butchers, just make sure it's British and is labelled 'Rose'. I will definitely be putting some on my shopping list.

A random fact for you:

• When disturbed, some jellyfish fire out venomous tendrils – they literally shoot at attackers – impressive!

Oh, and just to prove I am doing my sketch a day diary, and yes, I know it's fairly boring, but I tend to pick objects on my desk...: 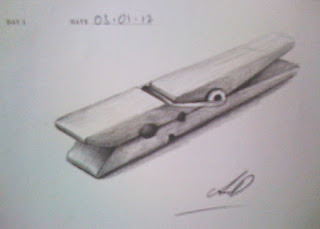