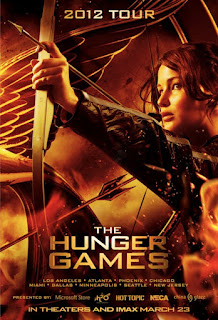 As you know, Sci-Fi is my genre of choice, and I was keen to see this one as it ticked all the boxes: futuristic, strong female lead, interesting storyline and some excellent cinematography.

Directed by Gary Ross, who also directed Seabiscuit and Pleasantville,Starring: Jennifer Lawrence as Katniss Everdeen and Josh Hutcherson as Peeta Melark, as well as some big cast names like Donald Sutherland, Woody Harrelson and Stanley Tucci to name but a few...

The start is gritty and pulls you straight in to the lead characters life as a downtrodden district 12 resident. Although I understand the need to 'set the scene' I felt that the first half of the film was a little slow paced and the games themselves were a little rushed through, it almost feels like more time could have been spent exploring the tensions of the arena and the perils faced by the participants of the games. Because of the rush, I found it quite difficult to fully empathise with some of the characters (something I am generally a sucker for).

The costumes were amazing, with most of them being perfect wardrobe companions for Lady Ga Ga, outlandish, ostentatious and striking in the extreme, all very plausible fashion developments, which I felt made the whole thing a little more believable.

All in all this film had my attention throughout and yes I would see it again, but the pacing I felt was a little off. Great film, but needed a bit more to it. I did enjoy the fact that a lot of the violence was suggested, rather than displayed – sometimes you just don't need things to be so graphic. The filmwork was wonderful and succeeded in making me really feel a part of the scene at times.

It has left me a little wanting and I do feel like I need to know more, so, I am now looking forward to reading the novel, The Hunger Games, by Suzanne Collins. Perhaps this is something I should have done before I saw the movie as I think this would have completed the experience for me.

A thumbs up despite it's occasional short falls.
Posted by Angie at 03:50