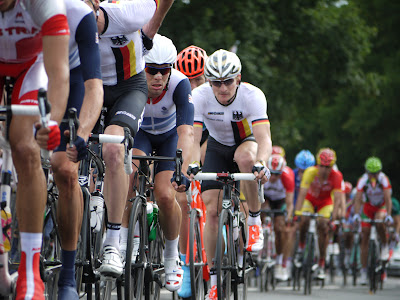 The sun was shining and the Brits were out in force, following a spectacular opening ceremony which kept the majority of us up way past our bedtime. But yes, it takes more than that to keep the Brits away from the support of team GB. So we were up early and 'bagging our spot' along the route of the Men's and Women's Road Race...

Being lucky enough to have the road race pass by our very door, and having long since accepted the disruption of the roads, we prepared for the Men's race day with an Olympic sized breakfast and then walked to the first viewing point where the cyclists would pass Hampton Court Palace. The atmosphere was fabulous and the flags plentiful, it would seem that everyone who could be there, was. Not that I actually 'saw' anything, I was too busy focusing and steadying my camera!!

However, later in the day when the return loop passed within 100 m of the house we had a better opportunity and with the sun shining we waited and soaked up the atmosphere until the motorcade came in sight and the crowd erupted. The anticipation was almost tangible as the peloton rounded the corner... being so close, the speed with which they passed us was breathtaking! Again, I remained concentrated on the lens in front of me and so wasn't really aware that I had caught our man Cavendish dead centre in most of the shots. Once the last of the support vehicles had gone, we watched the finale on the TV and though we were gutted that our cycling team weren't highly placed – it was a great day and a great race. 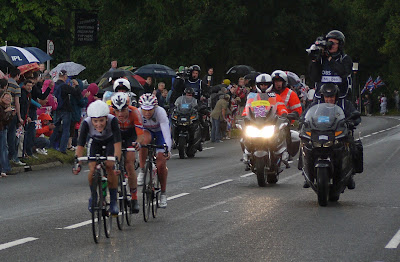 The following day we repeated the performance but this time for the Women's race, which we followed on screen until the very last minute, rushing out and getting in place to see the three leaders stream past – Lizzie Armitstead was at the front as she passed us and was grinning as the crowd screamed out their encouragement.

I have to say that the race felt much more dramatic than the men's although, and I am sure it was partly due to the downpour, the numbers were fewer along the roadside, but we certainly made up for it with volume and colour – the sound was deafeningand there were so many flags in the air, it was truly spectacular to behold.

We caught the remainder of the race and watched with baited breath as our girl won the first silver for the GB team. Well done Lizzie, and to the rest of the women's team who performed exceptionally well throughout, you have done us all proud. I for one have been well and truly bitten by the Olympic bug.

It takes a good shove to get some of us into that supporting mood, but once we are there, we are a stubborn lot and like our determined Olympic team, we will go the distance and be there with them every step of the way. I wish them all the best in the coming events and hope they feel the sincerity of the support they have. Whatever happens we all know you will do your best and that makes me immensely proud. Good luck team GB, we are all rooting for you.
Posted by Angie at 03:58