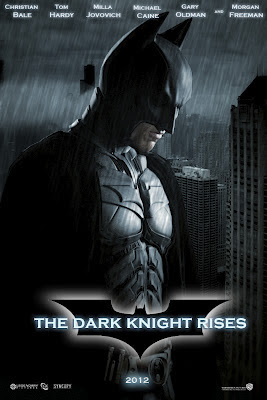 Yet again, another Sci–Fi blockbuster to satisfy my alter-ego, 'Batman, Dark Knight Rises' and what a blockbuster. It was an absolute pleasure to watch. Gone is the cheesy, predictable content that was seen in some of the earlier batman movies, if 'Dark Knight' was the adolescent, then 'Dark Knight Rises' really is the fully fledged grown up. Our very own, home grown, Tom Hardy plays 'Bane' and plays it to perfection, managing to portray Bane as both a character to be truly feared and simultaneously, one to be pitied and even admired...

Michael Caine, as always, added a special magical spark with his portrayal of Bruce Wane's loyal butler and friend Alfred, never failing to hit the spot.

As I left the cinema, I was almost speechless, I did say almost... there was nothing predictable about this movie, well OK, there were a few predictable scenes, but all in all it surprised me from start to finish and I loved it. Anne Hathaway was a surprise, playing a cat burglar (and no I am not giving the game away) with dubiously flexible morals and an even more flexible costume, a far cry from the 'Goody Goody' character she most frequently adopts. She has some great lines and a great costume designed I am sure, get many a pulse racing.

Dark knight rising is most certainly the darkest in the Batman trilogy. You can expect some impressive sets, some great gadgets (it just wouldn't be the same without them) and some fantastic acting. I could and will watch it again and again, in fact I can't imagine ever getting bored of it.

So fill your oversized tubs with popcorn and settle in for a quality night at the cinema, because trust me, it will feel like a very long wait until this comes to your home screen.

Soapbox moments and random stuff...
1.Is it just me or does everyone else feel that the Chinese approach to the Olympic games is unethical? Olympic training camps where kids, literally children, are kept from their families for up to 10 years, with no contact and virtually no communication to 'focus' on their medal winning skills - that's just not right, right?

2. Does anyone actually understand Morrissey's gripe about being overly patriotic? What's wrong with taking pride in our country, its athletes and their accomplishments, or perhaps he's still too depressed form the 80's to get excited?

3. A good friend of mine was actually hit, yes hit, buy a bouncing bike that became 'detached' from one of the support vehicles during the Olympic road racing, proving without a doubt that spectating can be a dangerous sport indeed!

4. And finally, in a world where there are often too many words used to say something simple, the Welsh in their infinite wisdom, and I mean that sincerely, have a solution at least for one phrase:
'The day before yesterday' = 'Echdoe'
Posted by Angie at 02:10