Girl power on the big screen... 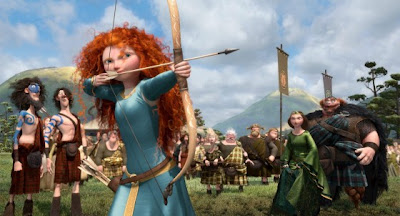 I do love an animated adventure, partly because I am just a big kid at heart and partly because the animation is just so awesome these days. I love the detail and the textures that modern animation can achieve and I really do appreciate the huge amount of time spent on them. So imagine my delight when Brave was released.
A strong female, and I do love a female heroine, takes centre stage in this delightful animation set in Scotland. Make sure you pay attention to the opening scenes, they are truly stunning and guaranteed to make you want to visit Scotland.

As always the cast is a talent feast, with Billy Connolly, Julie Walters, the fabulous Emma Thompson, Robbie Coltrane, Kevin McKidd (what a cool name) Kelly Macdonald and so many more...

So, without giving the game away (this is all information you will see in the trailer), the story is about a Scottish princess (Merida) who, defies tradition and seeks her own destiny at a time when politics and bonds between clans are key to the survival of the kingdom. I will be honest and say that if you are looking for another Shrek or Ice age, you won't find it here, the story is more dominant than the humour, although as you can imagine with Robbie Coltrane and Billy Connolly, humour is definitely on the agenda. There is more subtlety in this film than I have seen for a while, making it very watchable, time and time again spotting new things, details and noticing subscript and background scenes that you may not be aware of first time round. Visit the website (great for kids) here...> and see the trailer here...>


The story is charming and moving and yes, it's probably a chick flick animation. Boys, I think there may be some shoot em up playing next door... As always, you are treated to a Pixar short film before the main feature (something that always takes me back to my childhood and Saturday morning matinees...) which was equally as delightful.

I enjoyed it from start to finish and I urge you to see it. I can't say whether you should see it in 2d or 3d, your choice, but it's definitely worth a trip to the cinema.


I nearly went for a large popcorn this time, but managed to resist the urge – I will do it one day and to hell with the covetous looks from other cinema goers...


I have an Odeon Premiere card, which is an excellent deal by the way, but I was told by the assistant on the snack counter that whilst I earn points on a small popcorn, I don't earn points on any other size purchased... what's that about? Surely they would want to encourage you to spend more..? Not happy about that.


Apart from the above, if you go to the cinema regularly or have kids that do, the Premier club card is excellent, you can pay (to get extra points) or you can go for a completely free version, and with cinema tickets being so pricey these days, it's well worth it to accrue points and get a free ticket every now and then (things are so much nicer when they are free right?). Check out the deal here...> and no I am not on commission.


The first UK cinema was opened on 21st March 1896 at 2 Piccadilly Mansions, London, by Birt Acres. It was called the Kineopticon and showed a series of short silent films.