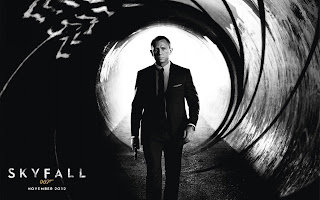 Oh yes, you guessed it, I was one of the many who helped the makers of the new Bond movie 'Skyfall' break box office records over the film launch weekend. Well, what can I say, But amazing. True to the Bond genre, in fact very classic Bond really. Not so many of the toys, but plenty of action and of course the obligatory Bond girls.

The film takes bond back to his grass roots, literally and the viewer is taken on a bit of a tour of the UK, with the film being based largely in London. It's good to see the familiar sights and to be honest it's about time James Bond came home.

The really nice thing about this film is that it doesn't take itself too seriously, there are a few tongue in cheek references to previous Bond movies and the gadgetswe have grown to love. We have an introduction of the new, younger model 'Q' who is, as a reflection of modern living, exceptionally young and brilliant to the annoyance, it would seem, of all.

Daniel Craig, is brilliant, producing a lovable rogue on the wrong side of 40 and dealing with his demons in a way that only Bond can. We are shown a more vulnerable Bond in this movie, and you know what, I for one love him more for it.

Javier Bardem, plays a very interesting role as Raoul Silva, and its a battle to know whether to pity him or just plain hate him. The way he is presented is visually abhorrent, but the character is strangely captivating. Watch out for the very interesting, and dare I say intimate, scene between Bond and Silver...

I don't want to give too much away and ruin the film for those who haven't had a chance to get to the cinema yet, so let me end by saying that Sam Mendes has done a truly magnificent job of this 50th anniversary Bond film, and I look forward to the next project... you can watch the Skyfall trailer here...>

You have my word that to miss this Bond Movie would leave a gap in your personal development, not to mention a gaping hold in your DVD collection, watch it, buy it, love it.

Some throwaway, non Bond related facts for you:

• Wolves can communicate with their pack up to 2 miles away... impressive huh?
• However, howler monkeys can produce a sound that can be heard up to 10 miles away!