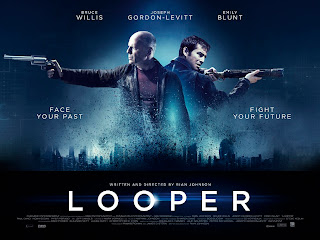 Rumour had it that this was the new 'matrix', however, I disagree. Don't get me wrong, I loved The Matrix, well all of them... Really loved them... And this, I felt, was a completely different genre. After all, The Matrix was about a fictional reality, Looper is about time travel, time travel abuse if you want to be specific. So not a lot in common really, right..?

Anyway, I digress: Looper is an interesting look into the future - two futures, and although it takes a little concentration, it's well worth the mild headache. My advice though is to make sure you don't need the toilet in the middle and as ever, stock up on popcorn!

Brucie as ever, gotta love him, plays the part as only he can, hard man, hard to kill, standard Bruce style one liners, you know the form. His younger self, played by Joseph Gordon-Levitt was excellently done, I can't quite work out whether it was cgi or prosthetics that were used to morph the physical features, but whatever was used, it was impressive and very effective.

The film itself is an interesting concept, funny in places and with an novel interpretation of life from an age perspective. As with all of these science fiction movies there was some cool transportation featured (I so want one of those bikes!) and actually, quite unusually, there was a refreshingly small amount of 'Sci-fi toys' scattered about, making the film that bit more believable, strange as that may seem.

The plot: and no I'm not giving away anything you won't see in the trailer – essentially the crime bosses of the future control time travel, and as you would probably guess, not in a good way. Loops in time are created to allow these powerful men the perfect way to dispose of their unwanted enemies and former friends. The film explores the idea of destiny made more complicated with the inclusion of the time travel aspect and follows the fate of one young looper caught in the middle of a problem not strictly of his making.

It's a good story, well played and just complicated enough without requiring a degree in molecular physics. There are a couple of disturbing moments, but again, this makes the whole thing more realistic and gritty. Get ready to see Emily Blunt in a most unusual role, a million miles away from anything I have seen her in before, and it suits her, very well. But the prize for best actor in this film goes to the young actor Pierce Gagnon, he was utterly faultless and at 10 (8 when he was filming) he really did excel, I don't think we have seen the last of this tiny talent.

Fun, fantastic, fast paced and futuristic...what more could a girl want? You can see the trailer here...>
Posted by Angie at 18:35