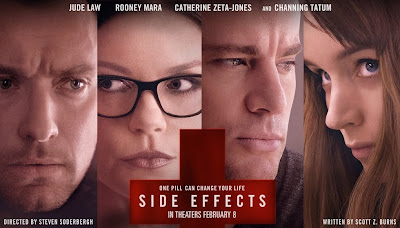 Ok so Jude Law, marmite right? Love him or hate him (I have a wee soft spot so I am in the former camp) he's generally a safe bet (despite a.i.) so when the Side Effects trailers came out, I was there, anticipating which size popcorn I would go for, I mean if it's a nail-biter, it would be large (as a distraction from the tension), but I digress: I saw it in a small screen cinema, which is usually indicative of a bit of a flop, or an end of run, so the signs weren't good.... I have to say that Jude put in an admirable attempt at a therapist, but he was just too soppy for my liking.
Rooney Mara, playing Emily Taylor, put in a convincing portrayal of a troubled soul, but to be honest, I found her more annoying than endearing very early on. There were twists and turns throughout, but they were, in my opinion a little predictable. However, I was surprisingly impressed with Catherine Zeta Jones character, and although not particularly believable, I can see her in an evil witch role in the future...

All in all I was relieved to have the distraction of a hefty box of popcorn, and very happy when it all ended. I wouldn't say it was an awful film, but it really didn't meet expectations. What I would say is that it really highlighted the American culture for anti-depressants, which certainly wasn't a twist I was prepared for.

So, if you love Jude, then go see it, because he is still very cute in it, but my advice would be to go on an orange Wednesday (to get 241) and save your hard earned pennies.