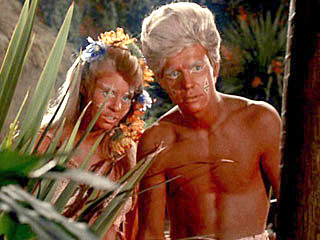 Now, I am not a lover of package holiday trips, however, I found myself recently embarking upon a fairly last minute one, because the weather here has been awful for way too long and I was desperately in need a bit of R&R. While away I found myself increasingly intrigued by the nature of the all inclusive holiday...


Arrival: Following a fairly uncomfortable and noisy flight, you are herded through the airport, separated into more manageable groups by your tour operators and loaded onto your transportation. Tired and probably a tad on the warm side, you are deposited at the reception of your hotel and taken through basic processing, where you are registered, tagged with a wrist band, given some vague instructions on the 'rules' before being released into the general enclosure.

The Restaurant (s): When you arrive at the restaurant you look for instructions (at least the Brits do) Patiently standing at the 'wait here to be seated' sign, before you realise that actually that sign is clearly just a decoration (the tourists streaming past you are testament to that). Now most all inclusive resorts feature a main buffet style restaurant, which seems to produce food 24/7. At these type of feeding stations you will notice some pretty spectacular beaviour:

The British: Will join any queue going and patiently stand there not having a clue what culinary delights await them at the end.
The Russians: will generally head for what they want and woe betide anyone who gets in their way! Incidentally, they don't hold with queues.

And so the dance of the nations begins...

The Bars: There are a multitude of menus illustrating (yes there are often photos) the many and various crudely named cocktails, which are all included in the cost of your holiday, and of course, there are always those who take full advantage of that.

The British: Quickly befriend the barmen, as let's face it, they will generally be spending a lot of time here and they start to congregate at the bar at around 11am.

The Russians: Anytime after breakfast is generally accepted as a Vodka toast moment, and as a rule of thumb they can't really be bothered with befriending anyone!

And so the dance becomes a little wobbly from this point. First to fall are the Russians, but that's only because they have had a head start on the British. The falling usually takes place on a sunbed at the beach - much to the amusement of the staff.

The sunbeds: What is it about 'bagging a spot' that makes us so territorial? Does the placement of towels on a bed grant us the rights to the approximately 3m square plot under a parasol? We spend the day manoeuvering in and out of the shade as required, rotating (a bit like daisies) to follow the sun's trajectory whilst not straying too far from 'OUR' parasol. We are careful not to 'trespass' on another persons 'territory' and we get spiky if anyone dares to encroach upon ours, I mean so what if I am not really using the shade, it's my parasol and therefore my shade - right? Er actually, no, you are just a tennant, but I am guilty of this rather bizarre territorial trait too.

So after a day of fighting to defend your patch, trying to ensure that no drunken Russian or Brit  breaches your borders, you retreat to your room and prepare to follow a similar routine tomorrow. You spend your 'holiday' dancing and watching the dances of others around you before the wrist tag is severed, the doors of the enclosure are opened and you are released into the hands of transportation once more. Is it any wonder that it's actually a relief to come home sometimes?

I for one, will not be doing the package thing again. Even though the Hotel itself was lovely, the food exceeded expectations and the weather considerably better than ours – it's just too exhausting and I now have a white band where the tag was! There's too much of the world to see and explore to be trapped in another tourist zoo again.