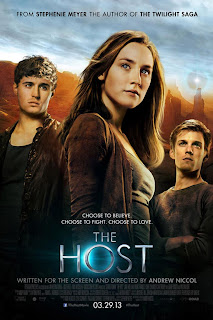 Originally written by  Stephenie Meyer, probably best known as the author behind 'The Twilight saga' The Host, in book form was captivating and had me hooked from page one. The film... (directed by Andrew Niccol) well it was good, but it didn't quite cut it. Honestly, I enjoyed it, but I had the memory of the book to fall back on...

Saoirse Ronan who played the lead role (Melanie) was excellent, I couldn't fault her, the 'seekers' vehicles were super cool (definately worth a look) and I wonder how long it will be before we see the halo-ed contact lenses appearing on the streets, but it just all seemed a little, well, flat.

The book allowed some empathy to grow for the invading species, but perhaps that was what was missing from the film... perhaps it just needed more explanation, or to be a two parter? I just don't know.  I would like to see more from Stephanie Meyer, but I just don't think this was a well executed translation to the screen.

I went with someone who hadn't read the book and quite frankly didn't get it, so, if you loved the book, go see the film, your knowledge will fill in any gaps and I am sure you will enjoy it just as I did, but if you are just going based on the trailer, you may be a little disappointed. If you fancy a good read though, buy the book and enjoy it, it's well worth it.

1. Easter egg chocolate is on average 50% more per gram to buy than the block chocolate from (bar) which it was made, sometimes up to 150% more depending on the brand.

2. Easter egg chocloate and a bar of chocolate from the same maker do in fact, taste the same.

3. From the National Geographic channel: what would happen in an alien invasion (yes, it's genuine)

• 52 percent of UK residents believe UFO evidence has been covered up because widespread knowledge of their existence would threaten government stability.
• Only 44 percent believe in God.
• One in 10 people has reported seeing a UFO.
• A quarter more men than women claim to have seen UFOs.
• 20 percent of respondents believe UFOs have landed on Earth.
• More than five million British citizens believe the Apollo moon landings were faked.
The survey that revealed these surprising results was undertaken by Opinion Matters as a tie in for a new video game - but hey, results are results right?