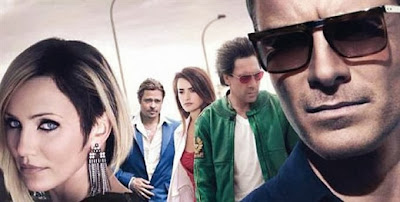 Ok, with Ridley Scott in charge and a dream 'A list' cast - The Counselor was clearly meant for great things. Starring Michael Fassbender as the counselor, Penelope Cruz as the counselors fiance, Cameron Diaz as Malkina, Javier Bardem as Reiner and Bradd Pitt as Westray.

Well, not sure where to start really, first tip - do not see this with your parents (I learned the hard way and nearly choked on my popcorn mere minutes into the film!). Second tip, if you want to have any chance of following the film plot, you might want to actually read about it first. A full Plot description can be found here...> or if you don't want to spoilt the surprises, if you can follw them at all then a brief synopsis, with no spoiler is:

Ridley Scott's The Counselor, from a script by Cormac McCarthy, stars Michael Fassbender as the title character, a slick lawyer who is madly in love with Laura (Penelope Cruz). He asks her to marry him, and she agrees, though she is unaware that serious financial troubles have prompted him to fund a drug deal with a shady but established middle man named Westray (Brad Pitt), that could bring in millions. Part of the counselor's financial troubles stem from the fact that he's investing in a club being opened by his best friend Reiner (Javier Bardem), a hedonist and occasional client who has attained his wealth by any means necessary, and likes to keep his wife, Malkina (Cameron Diaz) covered in all the accoutrements the wealthy enjoy. However, when the drug deal starts to go wrong, the counselor finds himself unprepared to deal with the fallout, and soon he's trying to protect his bride-to-be as well as himself from the wrath of a drug cartel that has no qualms about exacting revenge. ~ Perry Seibert, Rovi (Fandango)

The film seems to start assuming that you know what's going on and leaps straight into a complex storyline, leaving you (well me at least) a little bemused and struggling to keep up. Whilst the cast are faultless, the movie itself is difficult, difficult to follow and difficult, in places, to watch, I even attempted a positive disection of it after leaving the cinema and quite frankly gave up.

What I will say is that there are a few laughs, and plenty of uncomfortable moments, even more so with your Dad sitting next to you with a few off the cuff remarks like - 'I hope he has enough screenwash'. The sex scenes are graphic and if you don't get the comment my good old dad made, then you will if and when you see the film! I refuse to elaborate... The violence is plentiful and each member of the cast excel in their roles, playing them perfectly - so why is this film such a disappointment? Writing, concept, complexity? All of the above.

This is the first time I have seen Diaz in a role where I hated her character from the moment she was introduced, and the first time I have found Bardem's character to be charismatic and likeable. Fassbender, shows a softer side in this movie and his emotions are entirely believable - like I said the cat are truly exceptional, but if you go see this movie, prepare to hit the ground running and don't get too distracted by popcorn or banter - once you lose the thread it will be gone forever.

I'm not saying the film is bad, it's just hard work - see it and make the decision for yourself.

You can see the full trailer for the film here...>