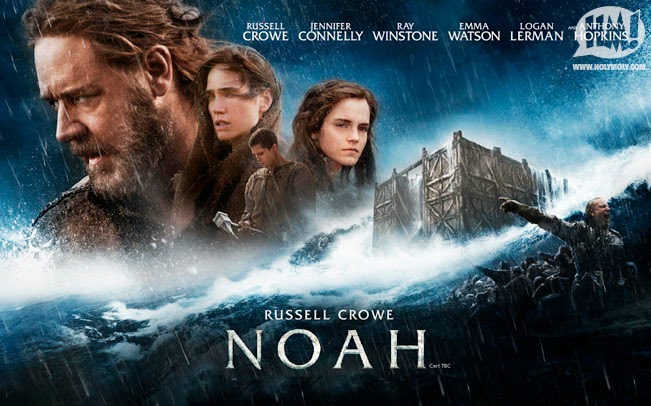 I never found religion, and forrtunately it never found me, so when the film Noah was advertised I was actually a little suprised at how much I wanted to see it. Maybe it was the cast, maybe it was the gritty trailer, whatever it was, I was one of the first in the queue, popcorn in hand.

Hopefully, religious or not, we all know the story and so there's not much risk of this being seen as a spoiler: Eden, Cain and Abel, flooding, animals two by two... ringing any bells? The wonderful thing about this film is perhaps that it adds some details that we may not all know and allows this biblical story to be told in a way that it's never been told before.

The effects were huge and spectacular with clever sub narratives keeping the pace up. Although if I am honest, I think I would have liked this film to be longer, maybe taken its time a little in places. For instance, I would like to know why Noah and his grandfather were strangers, what became of Ham? Yes, yes, more time in Sunday school may have helped, but you get the idea right?

But in all seriousness, this was a great movie. Ray Winstone (Tubai-cain) stole the show for me, he was every inch the baddie and loathsome from the word go, and who'd have thought, Hermione Granger – well well! Seriously though I have great respect for Emma Watson (Naameh) who has shown us all that there is life after Potter.

Russel Crowe (Noah) well what can I say - he may have the prettiest eyes in the business, but he always plays a 'strong character, softly spoken, slightly tortured' I mean, the role was made for him, and he suits a beard, but he didn't blow my mind on this one.

So whether you know your bible or not, this is a good solid movie, with effects that will blow your mind and certainly enough going on to keep you entertained. There are moments of tenderness, compassion and heartbreak - but surprise surprise I didn't cry once. So no need for tissues, just a comfy seat and some popcorn (preferably salt sweet mix).

Enjoy – and if religion finds you at the end of it - please don't tell it where I live...