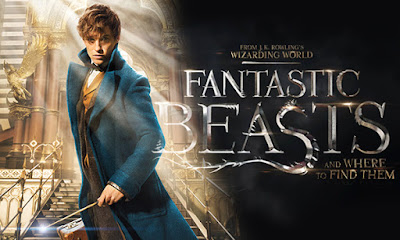 Fantastic Beasts and where to find them

Following on from the institution that is HP, Rowling has not let us down. This film is genius from the very start. Set in 1920's America, and full to bursting with 'A' list stars, it would be almost impossible for it to fail, in fact it surpassed my expectations.


Redmayne plays a superb and believable Newt; socially awkward, instantly likeable and honest, while his co stars work brilliantly alongside. Collin Farrell plays Newt's Nemesis to a tee, whilst the tantalisingly brief appearance of Johnny Depp assures our eager anticipation of the next, promised, movie in the series...

The Plot is a simple one, Magizoologist Newt is heading to Arizona in order to release one of his rescued beasts back into its natural habitat (Frank, the Thunderbird). However, there's not much meat on the bones of that story and our hapless hero soon finds himself in deep water and battling to save not only his beloved animals but also the world as we know it. Newt's magical expanding suitcase (think along the lines of Hermione's bag), home to a plethora of ridiculously cute and imaginative creatures, is opened by the lovable but Mischievous Niffler and from there on in, its a chase to save not only the animals, but also the muggle world from sure destruction.

The beasts we are introduced to range from the adorable (Niffler) to the plain weird (Murtlap), but be prepared to love them all, especially Pickett, the Bowtruckle! The CGI is truly spectacular and the action scenes really need to be witnessed on the big screen to be fully appreciated. That said, I am looking forward to watching it again and again at home when it is eventually released on DVD. 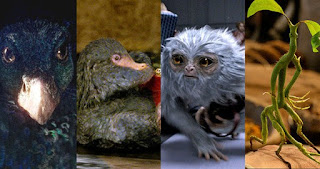 An all round crowd-pleaser, this will entertain all generations and is a sure fire winner if you are looking to entertain the family this Christmas. I loved it and I loved the subtle reflections of our own society in the wildlife and environmental concerns the film subtly touches upon. I have to admit it is a bit of a relief to know that I can look forward to more magical mayhem as JK Rowling continues the good work in transporting kids, and adult alike, into a genius world of purest magic - thank you JK!

For now, you can view the trailer and find out more here:  http://www.fantasticbeasts.co.uk/

Vaguely related facts...
1. The Niffler, whilst a fictional, magical beast, does bear a striking resemblance to an real life creature called an Echidna, found in Australia, Echidna babies are called Puggles - I know, I know! But it's the truth...

2. Turritopsis nutricula, or Turritopsis dohrnii, is an immortal creature, in fact the only creature able to transform its cells from mature state back to immaturity, in other words – back to youth. Real life magic! The process is referred to as 'transdifferentiation', and it basically makes the jellyfish unable to die.

3. The critically endangered Axolotl, a member of salamander family, has amazing healing and regeneration abilities and is capable of complete limb re-growth.