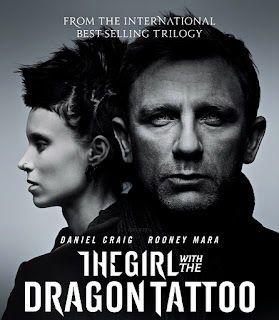 Well yes, there's plenty of both here. We are of course talking about the Hollywood version of 'The Girl with the Dragon Tattoo.

I am a little ashamed to admit it, but I didn't read the trilogy, nor have I seen the subtitled films and I'm not sure if I would have ventured into the cinema if I had. Please don't mistake that comment for a criticism of the film, far from it, it was excellent, I cannot fault it. But, and there is a but, for those of you who are expecting Hollywood to pull the punches a little, Don't. From what I hear, this is every bit as graphic as it is portrayed in the book and original film. On a scale of 1 to 10 of graphic content I would say this is trying to reach 11...

Daniel Craig plays a character that is a little out of character if you get my drift, he shows us a vulnerable side to his role and excels at it. However, It really is Rooney Mara who steals the show, as 'Lisbeth'. She looks weird, acts weirder and plays this disturbed character to a tee. You can be forgiven for thinking that Mara is a bit of a plain Jane, but in the flesh, she is truly stunning – just another great accomplishment by the team and make up on the payroll.

To find out more about the film, you can see the official site here...>

If I am honest, this film was hard work on an emotional and physical level (I had to set aside my popcorn and it takes a lot to come between me and my popcorn!). Friendly advice, eat something before you go and avoid cinema snacks. I was truly exhausted (and a little hungry) by the time I left the cinema. It's well worth seeing, it really is, but forewarned and all that – enjoy.

• Ankle tattoos really are supposed to be the most painful thing in the world.
• No one should ride a motorbike on wet cobbles – seriously!
• It's a myth that you lose the most heat through the top of your head.
Posted by Angie at 10:18