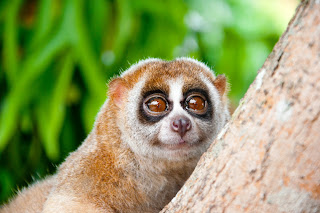 It has been a while since the BBC aired the show that highlighted the plight of the slow loris in captivity and the wild, but sometimes repetition is good and this message can't be hammered home enough...
I saw the various slow loris videos on YouTube and my ignorance of the facts made me a party to the social media promotion of this cruel and illegal pet trade. When I discovered, to my horror, that these gorgeous and highly endangered species were being snatched from the wild, from their mothers, and subjected to the most harrowing trials, physically and mentally. I was disgusted with myself and with those who are happily posting and watching these videos on line.

These creatures are nocturnal and venomous, something that the tribes people catching them have long since known. As such, the first thing that happens to them when captured for the pet trade, is that their teeth are brutally wrenched out with pliers and as a result, many of these creatures die shortly after being purchased due to infection or literally being unable to feed themselves due to their injuries.

Now, armed with the facts and seasoned with a little self loathing I want to see if, by using social media, we could make a positive difference. If you want to see for yourselves what this is all about, here is a YouTube video actually worth watching...

I have already spent a considerable amount of time going online and flagging the slow loris videos I find as inapropriate for reasons of animal abuse, in an attempt to get YouTube to remove them and prevent other users from uploading new ones. As one person, I can't really make a dent in things, but if the people who read this do the same, or even educate others, perhaps we really can help to do something.
All species of the slow loris are in decline in the wild and many are classed as endangered, Indeed many are already under the threat of extinction. Despite The Convention on International Trade in Endangered Species (CITES) ruling that there should be no commercial trade of these animals, Anna Nekaris among others, has discovered crates of them on sale in Jakarta maket, held in appalling conditions and being sold illegally to any tourist stupid enough and willing to buy them. It is hardly surprising then to discover that the Javan slow loris is the most endangered of all. If you want to help, just join in the campaign and speak up, flag inappropriate videos and lets attack the market through social media. We can't help those already in captivity, but we can help crush the trend for their purchase.
Posted by Angie at 08:26