A marvel and a masterpiece! 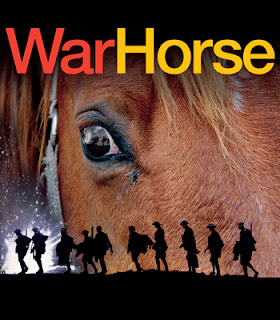 Back in September, I was lucky enough to be given some theatre vouchers as a birthday present and it had been on my list of to-do's to see War Horse for quite some time. I booked online and managed to get front row tickets for the show, but it meant waiting until now to do so. So, at the weekend, I was very happy to venture out in the howling winds and driving rain and head into town (not sure my other half was quite so chuffed!). We made it, a little moist round the ankles, in one piece, to the New London Theatre on Drury lane,
which I have to say is a great place, surrounded by small independent cafes serving food and drink at a reasonable price, so the evening started well with a bowl of chilli and a mocha just over the road from the theatre doors.

Our seats were pretty much centre on the front row and I stated to worry that we might be a little close, but I needn't have done, the theatre is excellently laid out and I couldn't actually see any seats in the house that would have been 'bad seats' the views were un-obscured and the stage rotates, so that if you actually get to see the performance from various angles.

I had heard so much about the show that I was a little worried that the hype might leave me disappointed with the real macoy, but I stuffed my face with double chocolate eclairs (They don't o popcorn at the theatre) and settled down (chairs were pretty comfy too...) to watch the show.

Well... within minutes I was completely smitten, with the puppets, the cast and the story. The concept is so complex, but the realisation of it by the creators of the performance made it all seem like a walk in the park. I can't begin to describe to you how life-like the 'puppets' (if you can call them that) were, you forgot the people that were operating them in seconds. The careful observations were expertly translated and every movement, shudder and shake of the tail convinced you that there were genuine horses standing on the stage in front of you.

I know that theatre tickets aren't cheap, but seriously, there are some things that just have to be done and War Horse is one of them. I would even go as far as to advise to buy the cheapest tickets you can find as I genuinely believe that the theatre is so well designed that you will not be disappointed, wherever you sit.

Male of female, I would also and I can't stress this enough, take tissues. It is an emotional rollercoaster and you will need to have tissues to hand.

I put off watching the film or reading the book, until I had seen the show and I am now desperate to do both...

It's an experience you will never forget and worth every penny spent on the ticket.

You can buy tickets at the National Theatre (they seem to be cheaper than other ticket sellers...).