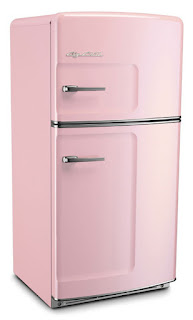 It was a busy day, and so when I opened the fridge and was confronted by a black hole, I was momentarily flumoxed – ah the light was off! So I checked the plug, yes, it was in and it was on. So I checked the appliances next to it (using the same supply), yes, they were working fine. Just to be sure I jiggled the fridge out enough to reach the socket and swapped the plugs over, after all, it could just be the one side of the socket that was at fault right? No, still no light. Must be a fuse then. So I located a spare flex (There is always a spare flex for something somewhere?) and went about changing the fuses round, and yes, I checked the flex was working first. You guessed it...
...still no light. Hmmmm (imagine me frowning and scratching my head here).

I placed my ear against the fridge door just to make sure that it hadn't miraculously jumped back into life while I was pondering – no sound, no gentle hum of a motor.

So I carefully edged the fridge out from the wall so I could observe the gubbins behind, as if in reality, this was going to be of any help at all.  Nope, no good, no movement, no sound and definitely no signs of life. Leaving the fridge where it was I retreated to my reliable old friend, the internet. After a quick search for 'fridge repair', I had a short list of local tradesmen with good feedback (very important that). At this stage it may be important to mention that it's coming up for a bank holiday and as you may have guessed, none of the aforementioned tradesmen could fit me in until Tuesday! So I returned the fridge and frowned at it, trying to make it feel guilty enough to at least try to delay it's funeral.

Having exhausted all avenues, I resolved myself to trying to locate a replacement over the weekend and set about repositioning the fridge to its former location. Being busy, I had tried to cut corners and not removed any of the items currently housed on top of the fridge, namely some cookbooks and plants etc. The usual suspects.

It was almost back in position, but not quite close enough to the wall at which point I chose to give it a swift shove, followed by a sharp kick (apparently this has occasionally been proved a successful technique...).

Retribution was swift – I heard movement form above the fridge and looked up just in time to receive one of the stone carved bookends full in the face. Having made contact it was quickly reinforced by the support of the books which had toppled, domino fashion and were now putting their full weight behind the book end.

After a few minutes of (slightly mufled) curses and struggling I was able to extract myself from under the debris and fashion a barrier of sorts to protect myself and the fridge from further mishap. Clutching my face and feeling slightly stunned, I looked in shock at the fridge as it started humming gently!!!

After all that, all that, it was just the bulb! Why did I not even consider that option – it's obvious isn't it? So the fridge is working fine, although it is a little dark inside, and all I have to do is locate a replacement bulb. I would have been happy, if it weren't for the black eye that is now colouring nicely.

So the moral to the story is that domestic appliance abuse is simply not tolerated, oh and yes, always check the bulb.

By the way, the fridge pictured? Not my fridge, it's the fridge that will REPLACE my fridge if it ever makes a fool of me like that again!!!

Random stuff:
• You may have seen them, even recently, but why is it that you can never find any spare fuses when you need them?
• Fridges only make a noise if the temperature inside them has risen enough to justify the motor kicking in.
• The inside of a fridge is darker than you think when the light doesn't work.
• Curve ball random fact: the latin name for a guinea pig is 'Cavia Porcellus' Thank you to Jenny at Cajun HR for that.