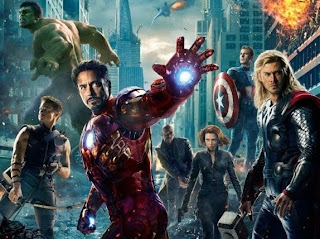 For all of you who like a good action adventure, coupled with a healthy dose of Superhero Science Fiction, then look no further. The Avengers is an excellent film which successfully combines all of the charisma,characteristics and humour from our favourite Marvel comic heroes.

The all star cast is just one of the many reasons to go and see this film either in 2 or 3D, each performing his or her role exceptionally well. There is a good amount of quality humour throughout and as always, Downey Junior (Iron Man) does not disappoint. I was also pleasantly surprised by Scarlett Johansson's excellent portrayal of the black widow.

The storyline, without giving too much away, is that Earth is threatened by a superior extraterrestrial power and the powers that be, put together a Super-force made up of mutants and misfits to lead our plant's defence – an age old formula that works and that we never seem to tire of. The Super-force, by their very natures, do not play well with each other and the film cleverly explores the relationships that develop along the way. There are plenty of memorable one liners, with a smattering of cheesy-ness (to be expected really and let's face it, the film wouldn't be the same without it...) and lots of science fiction toys to get excited about.

All in all, I would say that this film is in the 'tiny bit fabulous' category and I personally could watch it again and again (and probably will). Even for those strange folk out there who have little or no appreciation of the Sci-Fi genre, this is a thoroughly entertaining film and if you can get past the comic hero bit, go and see it.

I always suggest that films with impressive visual effects should be watched on the big screen if at all possible, and this is no exception, see it now, see it 3D and enjoy.

I personally hope there will be a sequel and I eagerly await its creation.