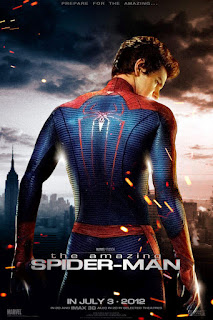 It was a foregone conclusion that I would see this film, yet another Spiderman movie I hear you cry! Or was it?

Andrew Garfield stepped into Tobey Maguire's shoes to be a new spiderman for a new generation, and I have to say, hand on heart he did it pretty well. He makes a believable geek, and when he assumes his aler-ego as a superhero, he carries off the cocky teen believably too.

His on screen girlfriend, Emma Stone, was exceptional and managed to pull her weight by injecting a good amount of comedy alongside the 'hottest girl in the school' persona.

Where it differed from the last trilogy was the empathy it generates with the characters from the start. Martin Sheen and Sally field were excellent as 'Peter Parker's' aging aunt and Uncle and the whole movie benefits from their ability to engage with the audience.

The plot was typical of the standard suprehero formula, but it lost nothing form being just that, good guy battles bad guy and falls for the girl... don't worry I' m not ruining the film here, it's a winning and much repeated combo.

The only character I wasn't so keen on was Rhys Ifans, maybe I have just seen him as the comedy sidekick too many times, but I wasn't convinced by his bad guy performance. That said, the film was excellent overall and I would def put it on the list – a great way to while away a rainy summer day.

Popcorn, as ever, delicious, hot dog, took 25 minutes to arrive and was disappointing – maybe it was the unrequested mustard...

3D or not 3D, well I opted for the 2D version and thoroughly enjoyed every second, not sure if the whole 3D thing is getting a little much now and besides, it makes it difficult to see my popcorn with the dark glasses on (I get my priorities right!).

So go on, invest a tenner and enjoy some escapism, it's well worth a look. You can see the trailer here...>
Posted by Angie at 11:35