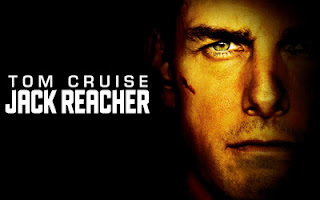 Okay, for those of you who like Lee Childs' Reacher book series, you may need a little bit of persuasion coupled with an active imagination to put Tom Cruise as the main Character. Not that I have anything against Tom, but let's face it, for a man, he's kind of, well, small...
and Jack Reacher is supposed to be over 6 foot tall! A huge, commanding presence – Tom Cruise, really?

Now before you acuse me of being Heightist, I stand merely 5ft 2inches in my stockinged feet, as my Nana used to say, so I really do believe that small is good, or at least acceptable. But, when you get used to a supersized character in a book, you expect to see him as such when transformed into a physical being the big screen (or small screen).

However, that said, I really enjoyed this film. It has a smattering of cheese, courtesy of the American film studios, but it's fast paced, darkly intriguing and has a good number of instantly hate-able baddies (Hollywood has def. got the recipe for a good baddie!). So I can forgive the odd Cheesy line and almost, not to harp on about it or anything, the lack of height, because, lets face it, despite the whole Scientology thing, Tom is just a cool guy and he was born to play the action hero.

Think of this film as a one man A Team type movie and you pretty much have it right there. I will form an orderly queue to see the next one, so that kind of says it all.

If you want to check out the trailer, you can do it here>

But before you go, a simple question: If you were forced to chew off a digit from your own hand, which one would you choose? Watch the film and you will understand what I mean...
Posted by Angie at 01:52