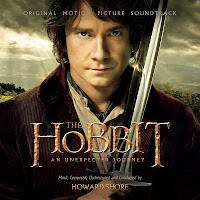 Yes, having had a busy Christmas, I had to wait until the New Year to get to the cinema, but it was certainly worth the wait. The first film had to be, The Hobbit – another Tolkien masterpiece and another of my all time faves...
I have to admit that although I was eager to see this film, I was also a little tentative. After all, the Lord of the rings trilogy was so good, would anything else come close, of course I knew the core material was fantastic, but Hollywood sometimes has a tendency to be a little over zealous and so lose the sparkle. Thankfully, my fears were unfounded and the film was excellent from start to finish.

We were treated to cameo appearances by Frodo and the eleventy one year old Bilbo, before being immersed in the magic of the tale itself. The film dilly dallies a little over the introduction of the Dwarves, and with such a long film, this is perhaps an area where the time could have been better spent, but I really am picking holes unnecessarily. I challenge you to recognise the actors playing the Dwarves. There are a couple fairly obvious ones, Richard Armitage (Thorin Oakenshield) - James Nesbit (Bofur) but with such fabulous make up, the rest are merely hints of familiarity... for the terminally curious, you can find the full list of names here>

It didn't take me long to settle into Middle Earth (and my popcorn) and I have to say that the Dwarves have been 'glammed up' a little for this film, with a couple of Dwarf hotties being thrown in (after all they are the lead roles here). The scenery was breathtaking and the acting impeccable. Martin Freeman was the perfect choice for the role of a young Bilbo Baggins, putting just the right amount of humour and empathy into the character.

Well, all in all, this epic movie truly lived up to expectations and left me longing for the next one. If you have missed it on the big screen, you might want to add it to your LoveFilm, or viewing provider of choice, list. You would be mad to miss it!


If you have been hibernating under a rock somewhere for the winter, you might want to see the trailer here>